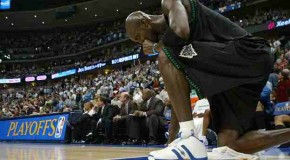 Kevin Garnett never won a ring with Minnesota but he had some great playoff battles with LA, Portland, San Antonio, Dallas and many other elite teams in the West. He got past the The 19 year old Kevin Garnett makes his debut in the NBA on this 1995-96 season opener. He looks anxious as hell (it’s the reason for including some seemingly worthless cuts - just notice Batkins was kind enough to grab some footage from last night’s long awaited NBA debut.  Two of the top PG prospects in the draft were in action against each other.  Kyrie Irving came off