I came across this video last week while I was just doing my daily ‘tubing.  Anyway, it shows you how good of a back to basket player he was.  Not only did he have Here’s the White Mamba turning defense into offense.  Check out the anticipation, the hustle, the speed in the open court, and lastly, the court vision. How did he even know Korver was there? Unbelievable 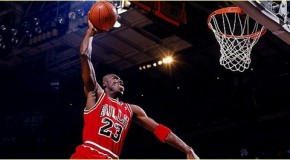 Chicago Bulls and Michael Jordan in the quest for three-peat. Chicago come to the playoffs as a 2nd seed in the East with 57 wins. In the first round they played the 7th