Steve Smith catches fire as he makes four threes in the opening quarter of an elimination game for the Atlanta Hawks. Despite shooting poorly from close range, he makes 7 out of 14 threes One of the greatest ever players dominating in college, one of the most important games of Larryâ€™s life and he delivered one of the best performances of his life. Larry Bird had one 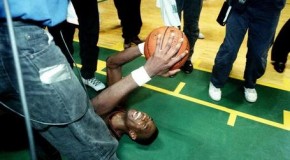 NBA playoffs record for a 5-game series - Dikembe Mutombo blocks 31 shots in the 1994 first round match-up against the Seattle SuperSonics. Iâ€™m sure I donâ€™t have to tell you more about the