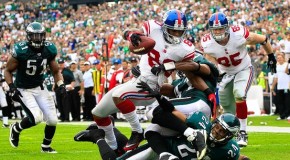 This week wasn’t as exciting as the previous one, but some pretty good and exciting plays were made, so there are your M2 Week 2 NFL highlights. Andre Johnson makes 7 catches for 93 5. Daniel Thomas, RB, Miami Dolphins The 2nd round pick out of Kansas State did not impress in training camp or preseason and with a lingering injury he had dropped in the depth