Kobe really, really needs to stop shooting 3s. Take a page out of the Lebron/Wade book, and just stop. “Kobe isn’t Lebron, 5 rings.” No, I’m not saying Kobe is Lebron. “It will get better, it’s 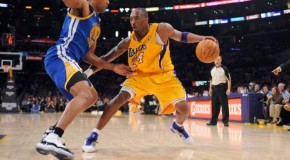 Shane Battier could be the best defensive player (talking about guards, swingmen) of the last decade. My attempt at an video of him guarding Kobe, who frequently struggled against Shane and shot with a