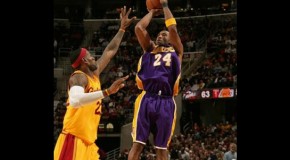 If you follow the NBA more than casually and take a look at all sorts of stats, you know that many different analysts and websites define “clutch” stats (when the game is on

Over the weekend Magic Johnson spoke to students at the University of Albany.  During what appears to be a scholarship speech, he cracked a small LeBron joke that had the crowd in a frenzy,