Over the weekend Magic Johnson spoke to students at the University of Albany.  During what appears to be a scholarship speech, he cracked a small LeBron joke that had the crowd in a frenzy, 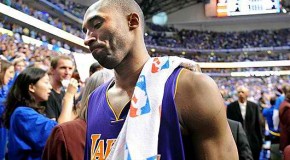 Turning Back The Clock

Turning Back The Clock by CD444 As Kobe and the Lakers lost to the Dallas Mavericks, Kobe’s legendary career is now close to an ending. Can he comeback next season (if there’s one) and