Javaris Crittenton was best known for being a (basically irrelevant) part of the trade that sent Pau Gasol to the Los Angeles Lakers in 2008 (Crittenton was sent to the Memphis Grizzlies). More recently

Well if you didn’t know or see, Chad Ochocinco got his jock rocked last weekend in New England’s preseason game against the Bucs. Unlike a large number of NFL receivers, he didn’t get up 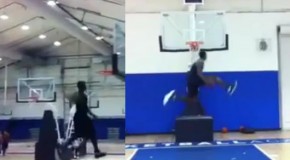 Just watch. What do you think