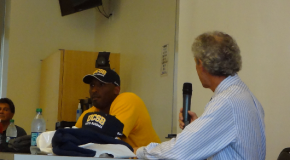 Kobe wants to play with Melo

Wednesday morning, Kobe Bryant decided to go to college. Ok not exactly, but he paid a visit to the campus of beautiful UCSB (University of California Santa Barbara), where he holds his annual Kobe Arrested Development will be back!

The greatest show ever - also known to a few people as Arrested Development - is set to return nextyear in a very satisfying way for longtime fans of the incredible show. It has