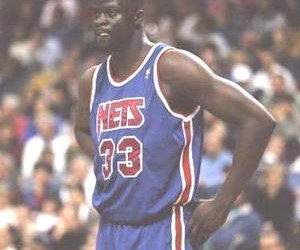 The George Washington Colonials lead by Yinka Dare have gone as far as they never had before - the Western Regional Semifinal. However their opponent is a real powerhouse - the Michigan Wolverines or (in?)famously known as the Fab Five. Before the game every expert believes that GW only have a chance of winning if their 7ā€™0 freshman center Yinka Dare plays a good game. By averaging 12 points, 10 rebounds and over 2 blocks per game he gets compared to Patrick Ewing and Hakeem Olajuwon, as well as being called the top freshman in the country by SI. The hype about Dare was huge at this particular time, use google and youā€™ll find a few articles talking about him as the next great big man. Too bad that as we all know it never happened. Same goes for this game.
Michigan double team Dare every time he gets the ball and the poor guy stays scoreless. Notice how the commentators say that he lacks experience and that in time he will get smarter, yet some years later with the Nets he still hasnā€™t made those proper adjustments. Chris Webber also schools Dare a couple of times and besides a block and some rebounds Yinka has a terrible game. The George Washington team however puts up a fight and if it wouldnā€™t have been for poor shot selection during the last minutes of the game, they could have made a large upset. Most of their successful play happens with Yinka Dare on the bench though, as their full court trap brings results and doesnā€™t require a 7-footer on the court.
1993 March Madness.

Yinka Dare plays a decent game for the minutes heā€™s given in this one. The Nets visit the about to be 72-10 Bulls and Dare is their starting center. In 14 minutes of action heā€™s perfect from the field and charity line to score 6 points, grabs 3 rebounds and blocks 2 shots. There are some turnovers, yet this performance by Yinka is the best Iā€™ve seen out of him. November 17, 1995.

Yinkaā€™s already in his second NBA season (his rookie year he got injured after 3 minutes of play, technically this is his 3rd season), this is his 65th game in NBA and he still hadnā€™t made an assist (4 assists : 96 turnovers during his career) at this time. In 15 minutes of play Yinka scores 5 points, grabs 5 rebounds and blocks two shots. You can see the awkwardness of his moves though. December 13, 1996

Ten days later the Nets once again face the Bulls and Yinka still hasnā€™t registered an assist. As he comes in for Shawn Bradley during garbage time in a 30 point blowout, Johnny “Red” Kerr and Wayne Larrivee have a good laugh about the poor guy. At this point Yinkaā€™s lack of an assist seems to have become a running gag around the league. December 23, 1996.

Yes, I do realize that Iā€™m not completely a decent human being if I have put in so much work in Yinka Dare highlight reels.