I canâ€™t speak for the rest of you, but I know that during NBA Playoff time I find myself even more obsessed with the game of basketball than usual. Since Game 4 between the 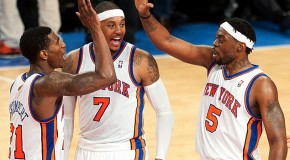 Hereâ€™s Bill Walker smashing one down on Ibaka the Shotblocka! JRicher managed to grab this from the Knicks-Thunder game a few days ago, which I missed due to the BCS Championship. Â This dunk didnâ€™t I honestly have no clue what's going to hapepn today. I pray...