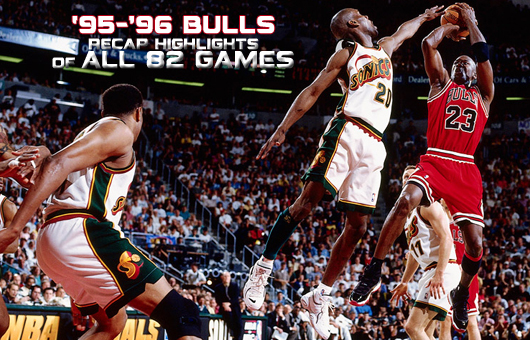 The most dominant team in NBA history has arrived. Consider this the inaugural blog of what will ultimately become a 17 part series guaranteed to riddle your stale, blog-reading life with sugary, sex-coated nostalgia. The series is set to cover every game of the 72-win team’s 82-game regular season of 1996. We’ll be pumping these out in 5-game pieces. Chronological order of course.

Some games - to the agony of many (see: none) of you - will not be restrained to mere highlight packages but rather footage of the game in it’s entirety.

Considering the absurd level of media coverage this team and its players have had over the years, the fact that these highlight reels are set to focus on both the Stars as well as the role players, from both the Bulls as well as the opponents, is rather paramount to the rarity of what’s going to be done here.

Want some stat with your visual? Thank the good folk at basketball-reference.com for the boxscores.

Opening Game of the season vs. Charlotte Hornets
http://www.basketball-reference.com/boxscores/199511030CHI.html

All credit goes to MixMakers forum member Superboule for his intuitive, determined effort. Thanks a lot, fella.

Be sure to give him a shoutout on his YouTube page or M2 profile.
http://www.youtube.com/user/basketvideos
http://www.mixmakers.net/forums/members/superboule/

EDIT: ALL LINKS UPDATED AS OF 29th AUGUST.